We are looking forward to your online order 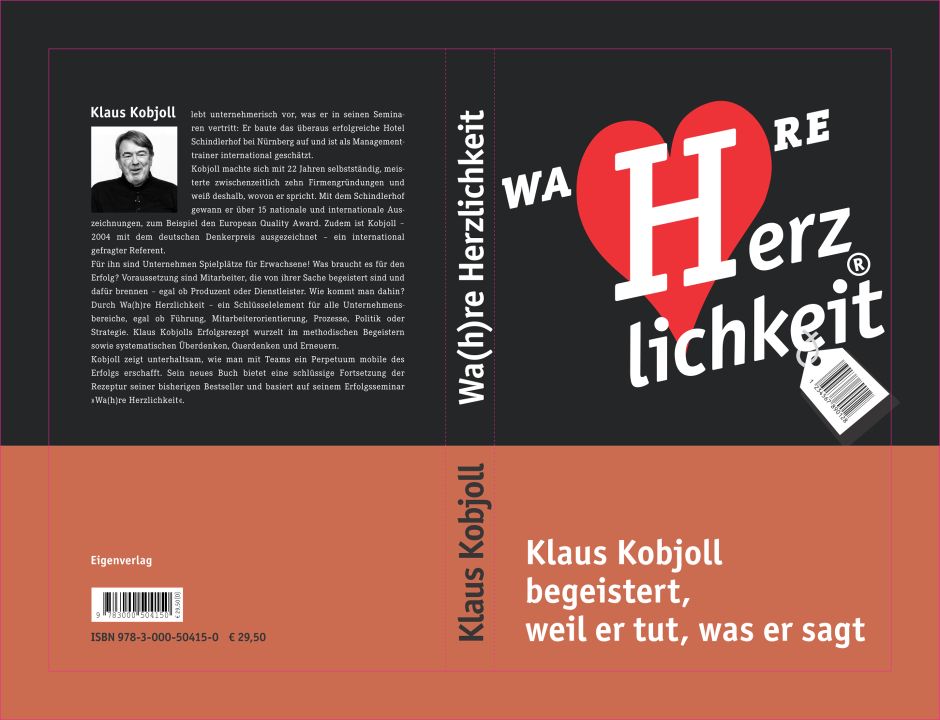 Actually, I never wrote a book...
It was always lectures or seminars about our very special company,
the Schindlerhof in Nuremberg, which someone - once even without my knowledge - recorded.
This resulted in a total of six books, of which well over 100,000 copies have been sold. At some point I had the rights returned to me by the publisher, - and suddenly there were none left; on Ebay, even single copies were offered and sold for € 150,--.
So I published the best of the six, "Wa(h)re Herzlichkeit" once again in my own publishing house. Unplugged and unchanged. This book was not only a bestseller in the field of business literature in Germany, but was also published very successfully in the Russian Federation. (180.000 copies in only one year according to the publisher in Moscow)

Those who swim against the current will reach the source faster!
We have almost always done everything exactly differently than most entrepreneurs:
* Built a strong employer brand when that word didn't even exist.
* Uncompromisingly made employee orientation the most important main task;
the high customer enthusiasm then came naturally.
* Started with a price guarantee right from the start: since 1984 every customer pays the same price with us. Discount was and is just another word for desperation for us.
* We have remained completely independent, not belonging to any cooperation,
They're not on any IV, and they're not at risk for blood clots.
Family-owned and proudly independent.

All recommendations in this book have been tried and tested in practice for many years and work in all service sectors! Many of our fans confirm this again and again.
Our Schindlerhof, which I was allowed to build from scratch together with my wife Renate, has long since been taken over with flying colours by our daughter Nicole, who in the meantime has made the Schindlerhof even more glamorous, with an innovative employee APP, I-pads for the entire team, the MAX ToolBox, which contains everything that is necessary for an almost paperless office: roster planning, suggestions for improvement, further training offers, an internal "whats app", an amazing employee self-assessment and much more.
Our grandson Maximilian has been a limited partner in our owning company since he was 3 years old, I merely act as brand ambassador and - of course - give lectures and seminars at the Schindlerhof on the subject of holistic corporate management (TQM) with the focus on "Wa(h)re Herzlichkeit!